Carel Viljoen finished the last leg of this adventure after spending 76 days in the saddle and pedaling unsupported for almost 5000 Km. Cycling to raise funds and awareness for the Child Witness Foundation and Institute Carel (65) and His Brother Deon (63) left Vryheid in early July cycling along the borders of South Africa and finishing the last leg in Kenton on Sea on 16 September 2017.

The intended distance was 6000 Km and would have seen them on the road for another month making their way back to the start point in Vryheid. Due to injury Deon was forced to quit a week earlier on the 9th of September and Carel continued solo until he reached his hometown in the Eastern Cape.

Due to these circumstances and other considerations Carel decided to call it a day, however knowing him i wont be long before the next Great Adventure!

We would like to thank every individual who contributed to make this a success. A special thanks to all the businesses who sponsored accommodation and meals, without you this would not have been possible. There are to many names to mention from the guys giving them a ride to the closest repair shop to the people who greeted them on the side of the road. There are those who kept the wheels turning no matter what. The phenomenal hospitality of the tables in Round Table Southern Africa and many other individuals and friend who carried us on their hands will not be forgotten.

Every cent spent and every word typed, Every shower and Every kilometer, Every meal and bed, Every word of support and every kind gesture helped us to create awareness for a cause that will change lives forever.

Thank You All for making a difference. 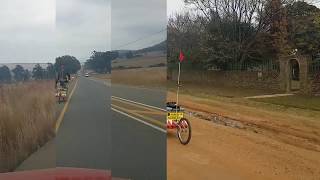 6000 KM CYCLE TOUR FOR THE RIGHTS AND DIGNITY OF CHILDREN